The crew told us about their experience:

The 2022 edition of the Cruising Yacht Club of Australia’s  Audi Centre Blue Water Pointscore series Flinders Islet race was run, with Shane Connely’s J/99 Rum Rebellion sailed by Graeme Dunlop and Tony Sutton winning two handed line honours and the two handed IRC win – a testament of how good these boats are in all conditions.

Upwind in messy seas and downwind in light breeze the J/99 shined. Picking the shifts, sailing high and fast to the island and getting some nice deep angles on the way home was key to the win.

The race itself was relatively straightforward and risk averse. A southerly breeze filled in before the start making for a fast downwind start and the team on Rum Rebellion elected to two sail reach out of the harbour to conserve energy and protect the inventory as we knew the next few hours beating into a southerly was going to be tough.

Sailing out of the heads mid fleet, Rum Rebellion went offshore in 17 -22 knots with TWDs of 170-195 degrees chasing current and waiting for the SE shift. Tacking back to shore on the SE shift allowed the J/99 to take advantage of current and set up a nice lay line into the islet. A SW shift with a rain cloud forced a couple of tacks at the island and both the Sunfast 3300 and the Sydney 36 ended up in front.

Rounding the island and heading out to sea into pressure, the team then waited for more SW which came as expected and the team gybed back in. Getting some nice pressure off a localised rain system, and then the land allowed the team to sail deep angles and avoid having to gybe back out to sea.

Setting up a drag race with the Sydney 36 on the way into the harbour, some smooth gear changes, and the right sail selection allowed them to cross the line around a minute before the competition.

A great race for the J/99 and the team are looking forward to the rest of the series.

Final Results for the Rum Rebellion: 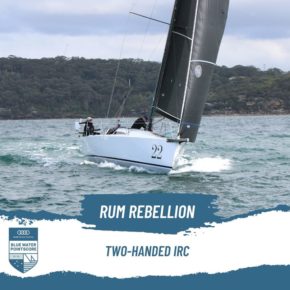 J Composites will be present at the Boot Düsseldorf from 21 to 29 January 2023   This is a unique opportunity to discover (or rediscover for the most assiduous) our Elegance range with the J/45 and J/112E. A combination of comfort, luxury and performance, these two yachts have been designed for the pleasure of the […]

At 10.00am on Saturday 12th November 2022 a fleet of 49 yachts started the Cruising Yacht Club of Australia 83nm Bird Island race where competitors sail from Sydney Harbour to Bird Island (approximately 3nm north east of Norah Head), before returning to Sydney Harbour to finish.   In light conditions the fleet headed north out […]

Join us until Sunday 11th September at the Cannes Yachting Festival! This is the opportunity to visit our J/99 and J/45. See you at Port Canto – Stand : SAIL163, SAIL026.

J Cup Regatta 🇬🇧 Last weekend saw the Key Yachting J-Cup Regatta organised by the Royal Ocean Racing Club. The race started on Thursday 30 June in sunny and ideal windy conditions for the 56 participating teams. ☀ Thanks to Key Yachting and of course the RORC for the organisation of this great event! 🔝 […]

The 2022 edition of the emblematic Spi Ouest France which took place last weekend in Quiberon Bay was marked by sunny conditions. The J/99s were once again at the forefront, especially in the IRC B category. Maxime Mesnil, skipper of the J/99 AXESAIL, winner of the IRC B category, gave us his impressions on his […]

🇬🇧 A single-handed Transquadra in a J/99, a such beautiful revelation! – Olivier Grassi, skipper of the J/99 Grassi Bateaux The Transquadra 2022 will go down in history with the highlight of the second leg, which required the crews to avoid the 2 depressions, by the North, in an almost obligatory way. For this new edition, […]

Spi Ouest France – Let’s get the J/99 fleet together! The famous French regatta is fast approaching! As the J/99 fleet is getting bigger and bigger every month, we encourage owners to enter the same category. What could be better than to compete against your fellow sailors? You participate at the race in J/99 or […]

3 years after the launching of our last sport sailboat, the 100th unit is already in production ! Let’s look back at some figures reflecting the success of this sailboat ⬇ Her production involve more than 10 full-time employees She is present in 25 countries on 5 continents One of them has been flashed at […]

🇬🇧 At the yard, we really liked sharing the sailing adventures of our owners. Here Thomas explain why he chose a J/99 and he explains his sailing program in Mediterranean sea. ⏬ Why did you choose a J/99? Calypso Odysessy was commissioned by RLR Yachting early in 2021 as we were excited about this new offering […]

🇬🇧 We officially launched our new J/45 last September during the Cannes Yachting Festival. We wanted to thank you for the very warm welcome you gave to the boat! Your numerous feedbacks have confirmed us in the choices and directions we’ve took for this new unit. Many of you, congratulate us on the loyalty and respect […]

🇬🇧 We are pleased to announce that we will be present at the Nautic Boat Show in Paris, from December 4 to 12 (stand n°J42). This edition will not be usual for the yard as we will not present unit on the stand. Indeed, the delivery and production schedule does not allow us to ensure […]

🇬🇧 J/45 – An Inner sense of light! The interior coherence and ergonomics of J/Boats at sea is an absolute given. For the J/45 the aim was to push back the boundaries in this regard. To do this, we teamed up with Isabelle Racoupeau for the interior design. She was able to bring to bear her vast […]

🇬🇧 Discover the video of the new 45 at sea! In the perpetual search for excellence in all levels, we wanted for our new unit, the J/45, to have an outside eye on both sides: performance and quality of life on board, by the famous skipper Benjamin Dutreux. This local skipper, based in Sables d’Olonne, […]

🇬🇧 We are excited to announce you that our new unit, the J/45 is nominated for the European Boat of the Year! Barely launched at sea, the 45 is already selected for one of the highest prizes in the sailing world, in the “Performance Cruiser” category. Next step, the sea trials with the journalists end of […]

🇬🇧 With 45 years of experience in sailboat design and millions of miles covered on all oceans, this new unit has succeeded in astonishing all J/Boats teams! This daring gamble to bring together unparalleled comfort (modern and bright interior, high-end upholstery and finishes, etc.), large interior volumes (very large storage capacities, volume of living spaces, […]

The J/99 is once again at the top of the races in France 😎 ✅ 3 weeks of regattas ✅ 3 key events on the Atlantic coast ✅ 3 victories for J/99   🥇Congratulations to Daniel Robin who won the Tour des Ports Vendéens with Jaffa, in double-handed, against the teams !! 🥇Congratulations also to Grassi Bateaux who emerge victorious at […]

After a particular 2020 calendar, the year 2021 is gradually taking its breath with the resumption of cruises and regattas this summer.  The entire J/Composites team wish you very nice cruising and sailing program. We leave you on this beautiful photo of a J/70 in Chili Do not hesitate to share with us your holidays […]

Did you know that more than half of the 15,000 J/Boats sold worldwide are used for family cruising programs and Bluewater cruising? Contrary to popular belief, a fast sailboat offers many advantages when going on vacation as a couple or as a family. Safety, effortless maneuverability, and the pleasure of sailing even in light airs […]

Congratulations to all of the J Boats competing in the Morgan Cup. Especially, Michael O’Donnell’s J/121 Darkwood winner of IRC One and second overall in a fleet of 73 boats. Bruce Huber’s J/112E Xanaboo was the winner of IRC Three and fifth overall. William McGough & Christian Jeffery racing J/109 Just So double-handed, finishing runner […]

Dear everyone, We inform you today that the French J/Cup 2021, in La Trinité-sur-Mer, June 26 & 27, will be cancelled. Indeed, despite the lifting of the current government restrictions in the organization of sporting and cultural events, the optimum conditions for hosting the French 2021 J/Cup could not be present. The organization of catering […]

>> Big news for 2021, the J Cups are multiplying all over Europe! This year, we are happy to announce in collaboration with our network of experts, 3 new J Cup dates! Initiated by our English expert Key Yachting Ltd, 22 years ago, the J Cup is a flagship event in the world of English […]

At J Composites we spend a lot of time on the water to train, test our latest models. Based on our experience we would like to share with you some a new tutorial regarding tips to manage solo a gybe and hoist with asymetric spinnaker. – Chez J Composites nous passons de nombreuses heures sur […]

To maximize performance at sea and navigation pleasure, we create unique mast profiles by model. For each unit, we are working on a particular development such as the versatility for the J/99 with we can either flatten the mainsail in breezy conditions or make it fuller in light airs. Discover in details the development of […]

J is accessible to all today. Because J Composites wants sailing enthusiasts everywhere to head out to sea, not just athletes.